Petit Dejeuner is Californian Cheese with a French name. The cheese is a soft, fresh, cow's milk cheese. It is made by the Marin French Cheese Company, near Petaluma, about 40 miles north of San Francisco. 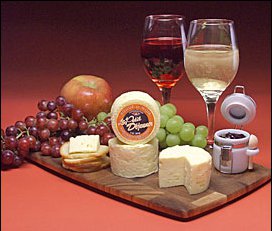 Petit Dejeuner is a soft, white cheese. It is a mild cheese similar in taste to Cream Cheese, though perhaps a bit more earthy and with a somewhat buttery flavor. It is also not as spreadable as Cream Cheese. The cheese goes well with crackers, bread, and fruit.

The term Petit Dejuener means "breakfast" in French. It is made by the Marin French Cheese company under their Rouge et Noir brand, but should not confused with their Rouge et Noir brand Breakfast Cheese. The Petit Dejeuner has more cream than the Breakfast Cheese. The cheese should be eaten with a few weeks after purchase. An edible, white mold rind may begin to develop on the cheese.

Petit Dejeuner is made from pasteurized milk of the Jersey breed of cattle from local dairies. Vegetable rennet is used to curdle the milk.

Petit Dejuener has won a few awards. In 2005 it won the Bronze Award at the California Commercial Cheese Competition and in 2006 it won the Gold Award for Fresh/Cream Cheese Cow's Milk Plain at the World Cheese Awards in London.

Note, since we first tried this cheese at the factory, we've been looking for it in stores ever since. Lots of stores here in Northern California sell cheese from Marin French Cheese, but we haven't seen Petit Dejeuner yet. If you don't live near the factory, your best bet is buying online.

Under \"Where to by\" section, all the links don\'t work. Thanks.