Pecorino Toscano is very similar to Pecorino Sardo. This is due in part because many Sardinian sheep herders migrated from Sardinia to Tuscany in the 60's and 70's. 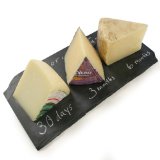 You can buy Pecorino Toscano online at amazon.com.