Pecorino Siciliano (called Picurinu in Sicilian) is made from whole sheep's milk in Sicily, Italy. It is an uncooked hard cheese, cylindrical in shape, and is used as a table cheese or for grating.

Pecorino Siciliano has somewhat of a dark rind with a white or yellow-white interior. Cheeses made in the spring or summer are yellower in color than those produced in late fall or winter. The cheese is usually aged about 3 to 4 months, but sometimes as much as 18 months or more. It has a sharp taste and a pungent aroma. It is less salty than its more famous cousin Pecorino Romano.

Pecorino Siciliano has been around for a long time, back over 2 thousand years ago when the ancient Greeks were in control of the island.

Pecorino Siciliano that has black pepper added to it is called Pepato. 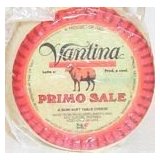 Pecorino Siciliano is not as well-known outside of Italy as Pecorino Romano, and is harder to find. Look for it in Italian specialty stores or fine cheese shops.

You can also find it online at amazon.com.