There are two different cheeses called Neufchâtel. There is a French cheese and an American cheese with the same name. Though they share the name Neufchâtel, the cheeses are not the same. 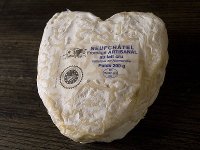 French Neufchâtel is a soft, slightly crumbly cheese. It's edible rind is dry and white with mold on it. It is similar to Camembert, but is saltier and has a sharper taste. French Neufchâtel comes in different shapes, but often is heart-shaped. It is aged about 8 to 10 weeks, and its flavor becomes stronger as it matures. It is traditionally made from unpasteurized milk.

French Neufchâtel is an AOC cheese, meaning that in France to be called Neufchâtel it must be made in a certain region in France following specific procedures. It received AOC status in 1977.

The cheese is named after the Norman town of Neufchâtel-en-Bray. It is considered by some to be one of France's oldest cheeses, being perhaps made as early as the 6th century.

If you know how to read in French, there is lots more information at this website about Neufchâtel.

French Neufchâtel is pretty hard to find in the U.S. You can buy it online at fromages.com.

One cheese legend says that American Cream cheese was invented in the state of New York when a cheesemaker tried to make French Neufchâtel and instead made Cream Cheese.

American Neufchâtel can be found in most American grocery stores. If you live elsewhere in the world, its close cousin, Cream Cheese, is much easier to find.