Queso Nata de Cantabria is made from the pasteurized whole milk of the Frisona breed of cattle. The cheese contains 45% milkfat. It is aged at least 7 days, but usually between 2 weeks and 2 months. It is rectangular or cylindrical in shape, and can weigh between 400gm and 2,800gm (about 1 to 5 pounds). The cheese is soft, and melts well. It is pale yellow in color. 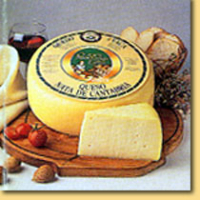