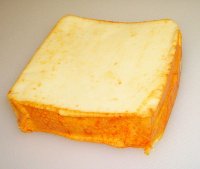 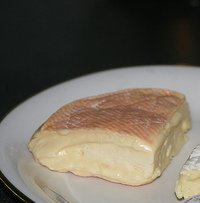 Muenster is a smooth cheese with an orange, edible rind made from pastuerized cow's milk. The rind is colored with annatto. (See annatto in our glossary.) Muenster has mild flavor that some have described as a cross between (American) Swiss cheese and (American) Provolone. Muenster melts well, and is good for sandwiches or grilling. In our opinion, anyone used to bland, boring, American processed cheese would do well using not-quite-as-bland Muenster. Try it on cheeseburgers next time you barbecue.

There is some confusion about the cheese, because the French cheese is often spelled both Muenster and Munster, depending on who you ask. The photos will show you that the French cheese and the American cheese aren't alike at all. The American version was first made by European immigrants in Wisconsin in the late 1800's.

In the United States Muenster can be found in most large grocery stores.

You can also buy Muenster cheese at amazon.com