Mahon Cheese is produced from cows milk on the island of Minorca in the Mediteranean off of the coast of Spain. It is a semi-hard to hard cheese, depending on how long it is aged. Mahon is one of the few cow's milk cheeses from Spain.

An interesting thing about Mahon cheese is that it is more squared shaped than circular shaped. During production the curd is placed in the center of a cloth. The corners of the cloth are then knotted together, giving the cheese its shape.

Mahon has a salty, tangy flavor. As the cheese ages its flavor becomes sharper and stronger. The rind is typically orange in color, from being rubbed with butter, oil, and paprika 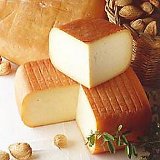 latienda.com sells both a young and an aged variety of mahon cheese.