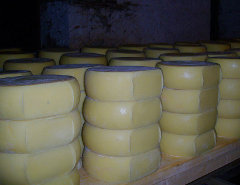 Kashkaval is a semi-firm, yellow sheep milk cheese. It is made in Romania, Hungary, Turkey, Greece, Slovenia, and Croatia. The name comes from the Italian word "caciocavallo", the name of a cheese made in southern Italy.

The cheese is aged about six months, and has a tangy flavor. An interesting attribute of Kashkaval is that it does not melt, so it can be grilled. Kashkaval is usually served with olives. 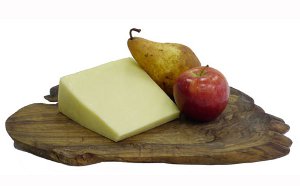 Outside of Eastern Europe and certain countries in the Middle East, the best place to find Kashkaval is online. You can find several types of Kashkaval (including cow milk) at amazon.com.

We have 4 recipes for Kashkaval in our recipe section.