Gorgonzola is a smelly blue cheese from Italy. It is made from pasteurized cow's milk, though there is also a goat's milk version of the cheese. It is named after the village of Gorgonzola outside of Milan. Gorgonzola cheese has been made for hundreds of years - since the middle ages. It is often used in northern Italian dishes such as polenta and risotto.

Though Gorgonzola cheese is named after the village of Gorgonzola, it is no longer made there. The village isn't so much of a village any more as it is a suburb of Milan. Most of the agricultural land has been swallowed up by development. Today Gorgonzola Cheese is made in certain areas of the Regions of Piedmont and Lombardy in northern Italy.

Gorgonzola Piccante has been aged at least 6 months. It is flaky and crumbly, and has a stronger flavor and smell. It has a sharp, biting taste from it's blue veins. It is darker in color than Gorgonzola Dolce. If it is brown in color it is too old and should not be eaten.

There are many theories about the beginnings of Gorgonzola cheese, and where it got its mold from. Most likely Gorgonzola was not originally a blue cheese, but later acquired the blue-green mold penicillium glaucum from caves that it was aged in. The original Gorgonzola was probably very similar to Stracchino. It was originally made from the milk of cows as they were lead from summer pastures in the Alps to winter pastures in the plains of Lombardy. Today the cheeses are pierced during maturation with long needles to encourage the spread of the mold in the cheese.

Gorgonzola is a PDO cheese. This means the name is protected in Europe and can only be made in certain areas. It is produced by about 40 dairies in northern Italy. 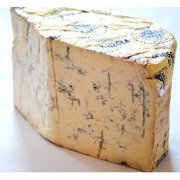 Gorgonzola is heavily exported, and can be found in many good cheese shops.

It is also available online at amazon.com. (Note, not all Gorgonzola cheeses sold on Amazon are from Italy. Read carefully before buying.)

I am trying to track down a Gorgonzola that i once found in Puglia It was unforgettable... the most divine cheese I have ever, ever tasted.It was unique in that it was aged , or rather the rind was coated in red grape that had softened and left a tangy sweet edible coating.The consistency of the cheese itself is very soft and creamy . Sublime. Does anyone have any idea what cheese this might be, what it is called , and where it is produced?I would give anything to track it down. Thank you so much