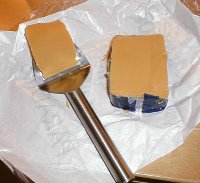 Gjetost (pronounced 'yet-oast') is a sweet whey cheese from Norway. The cheese is called Brunost in Norwegian, which means "brown cheese." The name Gjetost is used mostly in North America and is an archaic spelling of Gietost, which means "goat cheese." Gjetost has a strong, sweet taste, that is somewhat "goaty." The texture is semi-firm, often compared to the consistency of fudge. The cheese is usually formed into small rectangular blocks. Some people don't consider Gjetost to be a true cheese because of how it is produced.

Gjetost is traditionally made by slowly boiling the whey of goat milk for several hours until most of the liquid is evaporated. Most Gjetost made in modern times also contains cow milk and cream in addition to goat whey. The heat turns the milk sugars into caramel, which gives the cheese it's brown color and sweet flavor. Gjetost does not need to be aged and is ready to eat as soon as it is produced.

Gjetost is usually served in very thin slices on rye toast or crackers, often with jam. In Norway it is enjoyed at breakfast or as a snack food.

In the United States, the two most common brands are Ski Queen and Ekte. Ski Queen is made from whey, milk, goats milk, and cream. Ekte is made from goats milk and is a little sweeter and stronger. There is also a spreadable version that is not boiled as long.

Gjetost is mostly produced and consumed in Norway, but it is also made in Sweden, Iceland, and the Upper Midwest in the United States.

In January 2013, a truckload of Gjetost caught fire in Norway closing a tunnel road for the 5 days it took to extinguish. (read story here) 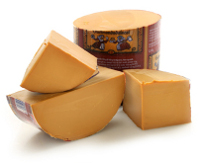 Toast some bread, add a good portion of butter and THEN surprise surprise a layer of Strawberry jam, raspberry is good too and then add the Gjetost. To die for. Note on Cheese Slicers. FInd one with a cerrated edge. They work far, far better than the flet edged style.

What red and white wine would you pair with Gjetost?