The cheeses are small, usually around 60 gm (about 2 oz). Younger versions are heavier. The cheese shrinks and dries out as it ages.

Crottin de Champcol starts out with a pale ivory rind with a soft, creamy interior. It is usually aged about 4 weeks before it is consumed. Often it is aged longer. As it ages, the rind becomes darker, becoming mottled with white, grey, and bluish mold. The taste changes also as this cheese ages. Younger Crottin de Champcols have a creamy, nutty taste with a hint of citrus. Older versions develop a stronger, more "goatey" flavor. 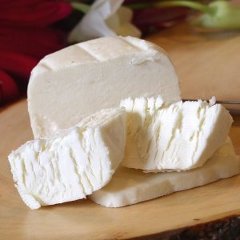 The word Crottin translates to "droppings" in English, as in horse droppings. Luckily, the name describes the size and shape of the cheese, not the flavor. (You'd never see a cheese with an English name called "Horse Droppings of Champcol Village", so I'm not sure how French people would want to call one of their cheeses this.) As the cheese ages and becomes darker, it resembles horse droppings even more.

You can purchase Crottin de Champcol online at amazon.com

We have 2 recipes for Crottin de Champcol in our recipe section.