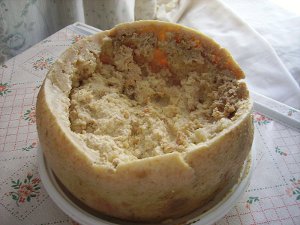 This is one cheese we definitely do not recommend.

Casu Marzu is Pecorino from Sardinia, Italy, that contains live maggots from cheese flies. Casu Marzu means "rotten cheese" in Sardinian. The acids in the maggots digestive system further break down the fats in the cheese, which makes the cheese soft.

The cheese is created by leaving Pecorino cheese where the cheese fly Piophila casei will land and lay her eggs. The eggs hatch, and the resulting larvae eat through the cheese. Because Piophila casei thrives only at a certain temperature level, Casu Marzu is a seasonal cheese, found mostly from late spring to late autumn.

Casu Marzu is eaten while the maggots are still living. Casu Marzu that contains dead maggots is considered toxic. The maggots of the cheese fly are resistant to human stomach acid, and some larvae pass through the digestive system alive.

Until recently, Casu Marzu was an illegal cheese. However, since Casu Marzu has been classified as a traditional food, you no longer have to find the cheese on the black market.

The good news (for would-be Casu Marzu eaters, at least) is that the cheese is no longer illegal, and if you are in Sardinia from late spring to late autumn you should be able find some. You may have a difficult time finding the cheese elsewhere.

So whom shall I contact to enjoy this lovely, strong & maggot infested cheese? Sounds so cloak & dagger!

What is wrong with some additional protein?

Its legal in Sardinia now and also being shiped to New York, though i hear they aren't selling the Casu marzu cheese but leting there customers try it free of charge. So if you guys can figure out away to sell it I will buy some from you and I'm not the only one I hear many people in US are trying to accquire this cheese, it has become very popular

Anyone got any leads to where we can get it in the UK? or who would import it ? Be amazing to try out!

Hey anyone have an idea where I can score some Cazu Marzu on line? I simply must try some before I die

Want to buy a Casu Marzu . . We make a youtube channel where we sampling the world with frightening thing . Are you anything you sponsor or discount.

We need 3 pieces of cheese . . We need a cheese that smells so violently and who are known to be the world's most smelly cheese.

So we need a cheese which is known to taste so bad that only a few people who can eat it.

Is that something you can help us !!

reply to peter a hansen

where can i get some?

As far as I know, the only place to get it is in Sardinia.

I NEED THIS CHEESE!! PLZ HALP!