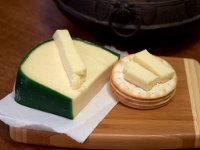 Bergonost is a buttery, triple-cream cheese made from cows milk. Though it has a Norwegian name, it is an American cheese made by Yancey's Fancy of Corfu, New York.

Bergonost is a mild, semi-soft cheese. It has a smooth flavor with a hint of sourness. The interior is a pale, creamy color, with an exterior green wax rind. It is made in wheels, but usually sold in plastic-wrapped wedges. Bergenost is spreadable, but perhaps not as spreadable as many triple-cream cheeses.

Yancy's Fancy claims that Bergenost is a "Norwegian Style Cheese," though it's unclear what is meant by that. The cheese cultures are imported from Norway, and it has a Norwegian name. Yancy's Fancy's website does not have much information about the cheese, apart from the many awards that their cheese has won over the past decade or so.

The name Bergenost comes from two words. Bergen is the second largest city in Norway. Ost is the Norwegian word for cheese.

Bergenost is sold in grocery stores throughout the U.S., but may be difficult to find in some areas. If your city has a Trader Joe's grocery store, you may want to check there first. You can also order by phone from Kutter's Cheese in New York by calling (888) 700-5275.

location of a vender for Bergenost. LOve the cheese will try trader Joe's, however, it's an hour drive.

I found bergenost cheese at a place near Ashland Ohio. It's Grendpa's Cheesebarn. They do have a website. It is right off I-71 north. i thought they made it, because I had never found any information on Bergenost cheese. So glad to find more inf o on it. I love it!

Recently Trader Joe's stopped carrying this cheese, as they replied to an email asking about it: "At this time our Trader Joe's Bergenost Cheese has been discontinued due to slow sales in all of our stores." I suggest you write them at: wcr001@traderjoes.com

I am on my last wedge and will really miss it...

A Costco by me (Metro Detroit) had samples of several Yancy's cheeses on 28 Oct 2011. Bergenost was one of them and they had a lot to sell. They may still have some.

I want to make an artichoke dip with this cheese from an old Wegmans Menue Mag. I couldn't find it at Fresh Market,or Harris Teeter in NC so thanks for the Costco tip. I'll try there tomorrow.

This is a pretty good cheese. Unlike most of Yancey's offerings (many of which are quite good) it is a natural cheese not a process.

First off, it's not traditional Norwegian cheese. Norway has a limited cheese tradition, and this is not there.

That said, ok it's an American cheese, and a good one. Maybe the best melting cheese I have seen.

Melting on sandwiches, chips etc. opens up the flavor which is not appreciated cold or even at room temp - melted it is fantastic.

Melted it has a nice nutty taste, smooth and creamy, very appealing. Much different from cold, which is rather bland.

Give it a try - I find it at local Costco with no problem.

Tried Costco in Roseville, Mi. where I have purchased Bergenost before, but couldn't find it. They had Yancey's smoked gouda, etc. After inquiring, I was told they have dropped Bergenost.

Yancey's Fancy Bergenost Cheese is sold at the Glenora Winery in the Finger Lakes Region in Dundee, NY. YUMMMMM !!!

yes, thanks...i love this cheese. my sister molly mcguigan got me this for christmas. i forgot the name but using some keywords i was able to find it through a simple google search. see ya

Bergonost Cheese is sold at costco

In the South, you may find it in some Publix grocery stores, especially one of the large stores with a large cheese counter and broad selection.

I have been a fan of Bergonost for many years. I first encountered it and still find and purchase it at my local "Hanaford" grocery store here in Bennington, VT. It is delicious light and creamy with just the right amount of bight.