Banon (also called Banon à la Feuille) is an uncooked, unpressed, unpasteurized goats milk cheese from Provence in south east France. Though it is a goats milk cheese, some cow milk may be mixed in. It is pale yellow in color with a nutty aroma. The cheese is soft in texture. There may be a little blue mold on the rind. The individual cheeses are small, about 8 cm in diameter.

When Banon is about 5 days old, it is dipped in eau-de-vie and wrapped in chestnut leaves and tied in raffia or straw. The cheese is then aged a bit further and is ready to sell in about a week or so. Banon is a fresh cheese and should be eaten soon after it reaches maturity. Banon has a woody, fruity flavor, since it absorbs some of its taste from the chestnut leaves it is wrapped in.

Banon cheese has been around since the middle ages. It received French AOC status in 2003, which means to be sold in France, the cheese must be made in a certain area, from milk of a certain breed of goat, using certain procedures.

The organization that controls the quality and production of Banon cheese has a website about its cheese. 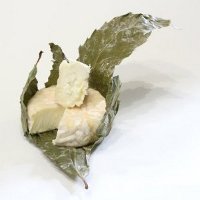 Because Banon is unpasteurized and aged less than 60 days, it is unavailable in the United States and countries with similar laws. There are pasteurized imitations available, however, if you can't afford a trip to France this year.

You can find Banon cheese (or something very similar) at amazon.com and fromages.com.