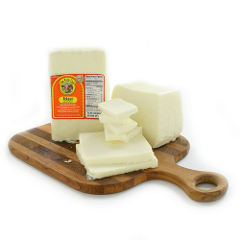 Ackawi (also spelled Akawi or Akkawi) is a soft, white, cow milk cheese originating in Palestine. Most Ackawi is made in Syria or Lebanon, though it is also made in the United States, Canada, and other places. It is named after the port city of Acre (or Akka) in present-day Israel.

Ackawi is usually (but not always) made in small squares. It is a brined, meaning that for at least part of its development it is soaked in a salt-water solution. Traditionally, the cheese is left in the brine until the day it is going to be sold. Today, however, you can buy Ackawi in plastic packages without the brine or in jars that contain brine. 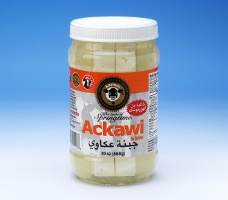 The brine makes the cheese somewhat salty. It can be rinsed in fresh water before serving if a less salty cheese is desired.

The cheese is soft and has a smooth texture.

Ackawi is mainly a table cheese, being served with bread or fruits. Because it does not melt very well, it can be fried as well.

Though mostly consumed in the Middle East, the cheese is made and consumed elsewhere, especially in places with communities of Middle Eastern immigrants.

The cheese is made in California by Karoun Dairies, and also in Canada by a company of the same name, though the Canadian company makes it clear on the website that they are not affiliated in any way with the Californian dairy.

You can find Ackawi online at amazon.com

We have 2 recipes for Ackawi in our recipe section.