Can you freeze cheese? 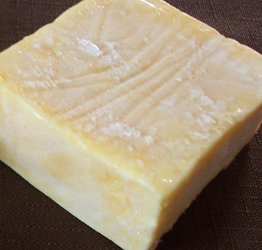 Okay, so the obvious answer is yes. You can freeze just about anything. Maybe a better question would be, is it a good idea to freeze cheese?

We froze 3 different kinds of cheese: Philadelphia Nuefchâtel (I called it Cream Cheese in the video, almost the same thing), Tillamook Medium Cheddar, and Pecorino Romano. Some of the Cheddar was pre-shredded.

We also had the same 3 cheeses in our refrigerator for the same amount of time.

Five days later, we thawed the frozen cheese for a few hours, and voilà, here's the first video:

I didn't notice it when I was filming the first video, but the shredded frozen cheese had jagged edges, the non-frozen had smoother edges. (Click to see larger versions of the photos below.) 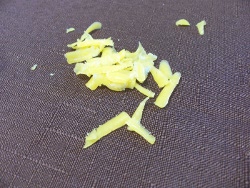 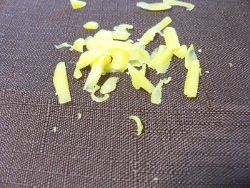 With the Nuefchâtel (cream cheese), the one on the left had been frozen, then thawed. It did not want to stick together when using a knife to spread it on crackers. 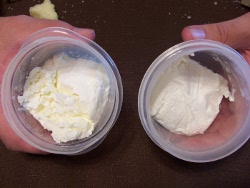 Of all three cheeses, the Pecorino Romano surprised me the most. I thought since it was the hardest of the three cheeses, it would stand up to freezing better than the other two. But it looked different shredded, and didn't melt as well. The cheese in the photo below on the left had been frozen, then thawed, then shredded. The one on the right had never been frozen. 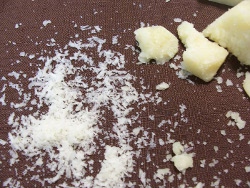 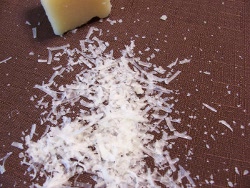 After my block of frozen Cheddar thawed, I shot another video, to see if it shredded as well as the Cheddar from the fridge. In the first video, the frozen Cheddar shredded pretty easily. Not as easy once it had been thawed.

And even after it thawed, the frozen Cheddar had a coloration difference. In the photo below, the one on the left had been frozen, and thawed. The one on the right, never frozen.

So, does it melt?

I wanted to see if freezing cheese altered the way it melted. I tried with the Tillamook Cheddar and with the Pecorino Romano. 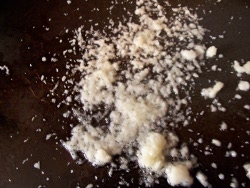 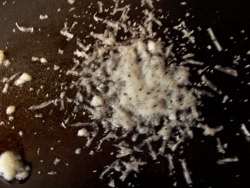 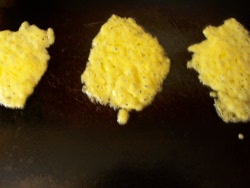 Here's what I found from my cheese melting experiment:

Thank you so much for including Tillamook Cheese in your testing lineup! I wonder how naturally aged cheddars like Tillamook stand up to freezing compared to artificially aged or flavored cheeses (the way the majority of other grocery store cheeses are made)? I wonder if being a natural product makes a difference?

Here are some additional cheese storage tips in case they’re helpful to your readers (or you need inspiration for more things to test!): http://www.tillamook.com/knowyourcheese/tips.html

Do you have a degree in Cheesology, or perhaps, a doctorate in Cheese making?

Alas, Derek, I do not. I'm just a regular guy who occasionally eats cheese.